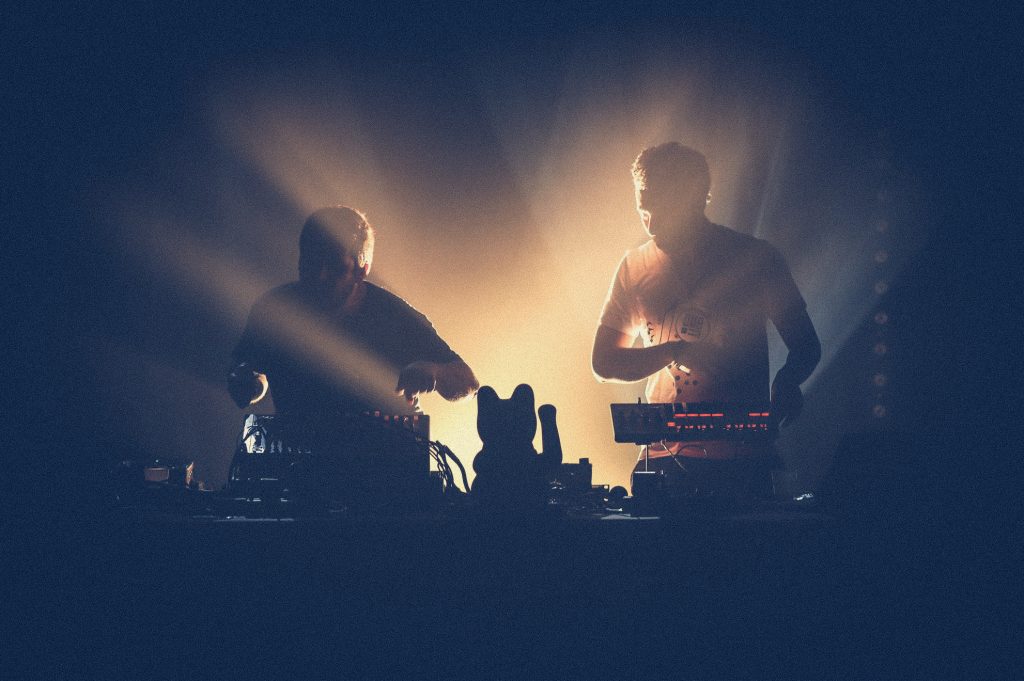 Since 2005, the Mahom developed their project around Dub music. They are inspired by the English dub scene and the reggae codes, all revisited in the French way with an electro colour and an ethnic touch. They produced 4 albums, 9 vinyls, and played in more than 200 concerts in Europe (France, Spain, Italy, Romania, Ukraine, Belgium, Germany, Poland, Croatia, Switzerland).
More than ten years ago, Joris created Mahom with Mathias at the drum. Antoine joined the band in 2008 as sound engineer. Throught the lives, Antoine find himself on stage with them.

In 2011, Underground Dubwise, Mahom’s first digital album, is released on ODG netlabel. It carries the founding spirit of the band. With 7 original titles and a remix of Barbés D, this album is a first foray into the space of the new generation of French Dub producers ! One of the album title, Faso Feu, inspires Amoul Bayi Regords and Daba Makourejah, which leads to the vinyl release of the Bamba version that had made the tour of soundsystem of the whole world.

A year and a half later, Mahom delivers a new opus : Dub by Sub. Its 8 tracks are in the line of Underground Dubwise : some dub stepper, simple and effective rhythmics, massive bass and of course an ethnic inspiration on some titles, true signature of Mahom. Note the collaboration of Tetra Hydro K, Fedayi Pacha and Mayd Hubb.

In 2012 the drummer leaves the project, Joris and Antoine evolves towards a live set where they share melodies and rythms. They adopt their Skankin Cat, this tireless cat that makes crowd dancing, becomes the symbol of the duo. At the same time, Pierre joined the project to help them with booking and artistic follow-up.

The eponymous album The Skankin ‘Cat is released on the ODG free download platform in 2014. This opus of 13 tracks and 3 remixes (Panda Dub, Gary Wide, Fabasstone / Dub invaders), puts Mahom as one of the major members of the French dub scene. With this album, the duo pushes back the limits of his creativity. True to its values, it surrounded many artists met on the road. He also works with the label Flower Coast to enrich their universe in order to further their artistic approach. This collaboration gives birth to the Skankin ‘session 1 vinyl, featuring two tracks from the album and two exclusive dub versions.

In 2016, Mahom teamed up with Ashkabad to create the Bass Trooperz project, this musical collaboration gave birth to a 4 tracks free EP on ODG, a vinyl produced by Patchwork Production and an explosive live where the four artists met on stage To play alternately compositions of Bass trooperz, remixes of Mahom and Ashkabad.

In 2017, Mahom continued his research and musical introspection with his latest album Fell in. The duo pushes further the opening on the different musical styles of the bass music. The musical journey takes you to the Orient, in dark and meditative atmospheres, through roots and soul tones. Mahom is surrounded by other artists for this project, Art-x at the melodica, Lisoun, Spelim, Thomas Kahn to sing and a remix of a Molecule’s track. Finally, the whole is oriented towards electro sounds for an album that wants to be opened to different musical universes.

Mahom attaches great importance to vinyl production which is an integral part of dub culture. It is for this reason that Antoine and Joris multiply the meetings with different labels and artists. Their latest being the vinyl Skanklab 6 with Irondubz or each created a track and remixed that of the other. The very first Skanklab was based on the same concept but with this time an exchange between Panda dub and Mahom. Also note a release on the label of Culture Dub, in collaboration with Adi Shankara, Maicee and Sista Bethshabée. Mahom is present on other vinyls with the labels Organic Roots Record, Emana Sound Record, Dub Alliance.
It’s live during soundsystem or indoor parties that the music of Mahom takes all its meaning. The complicity between Antoine and Joris on stage brings an additional dimension to their productions. It is for them the culmination of their work, make vibrate and dance their audience for an hour and a half over their low and rhythmic rhythmic. 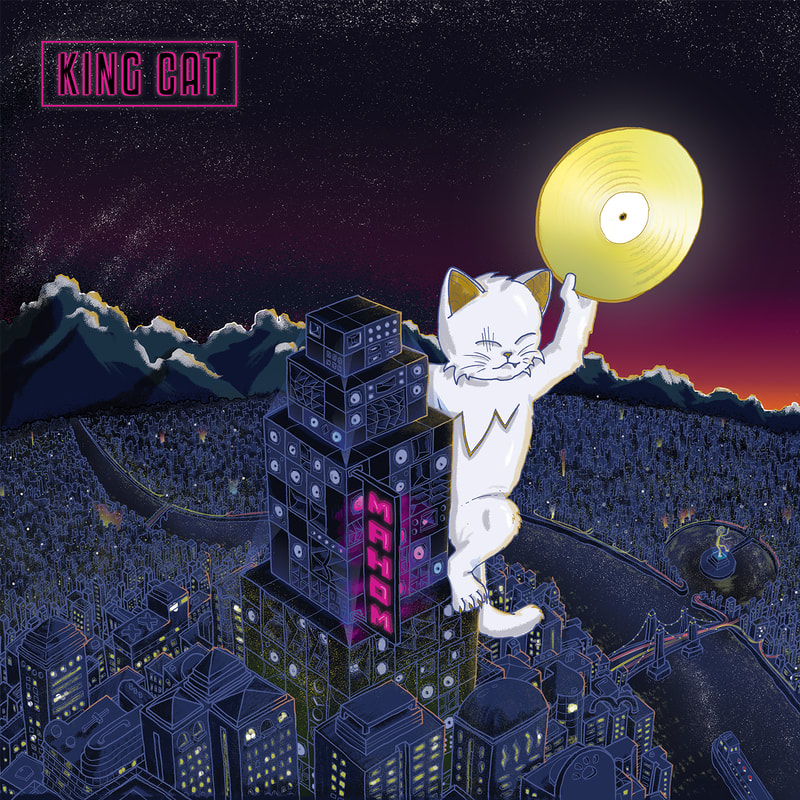 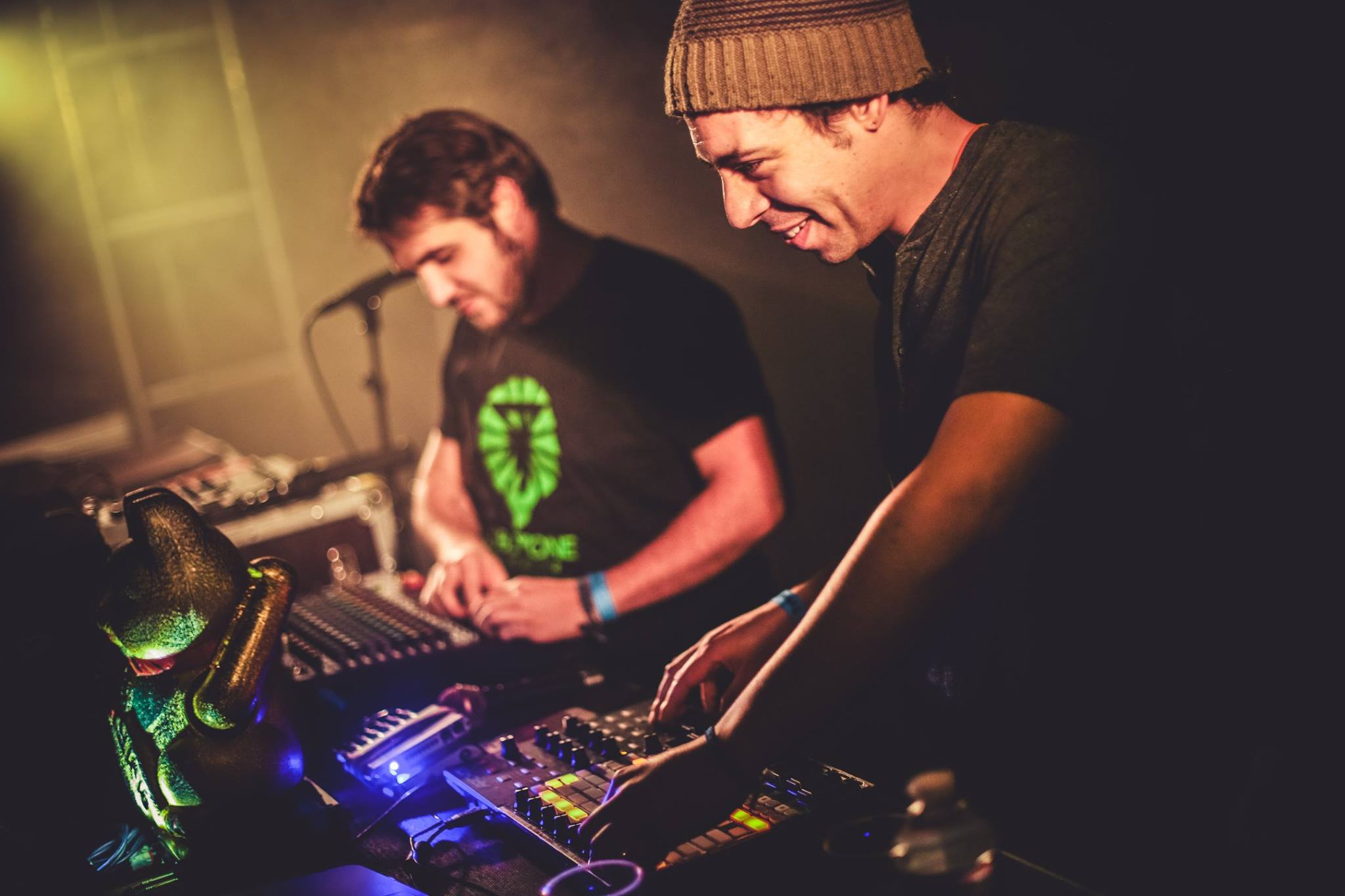 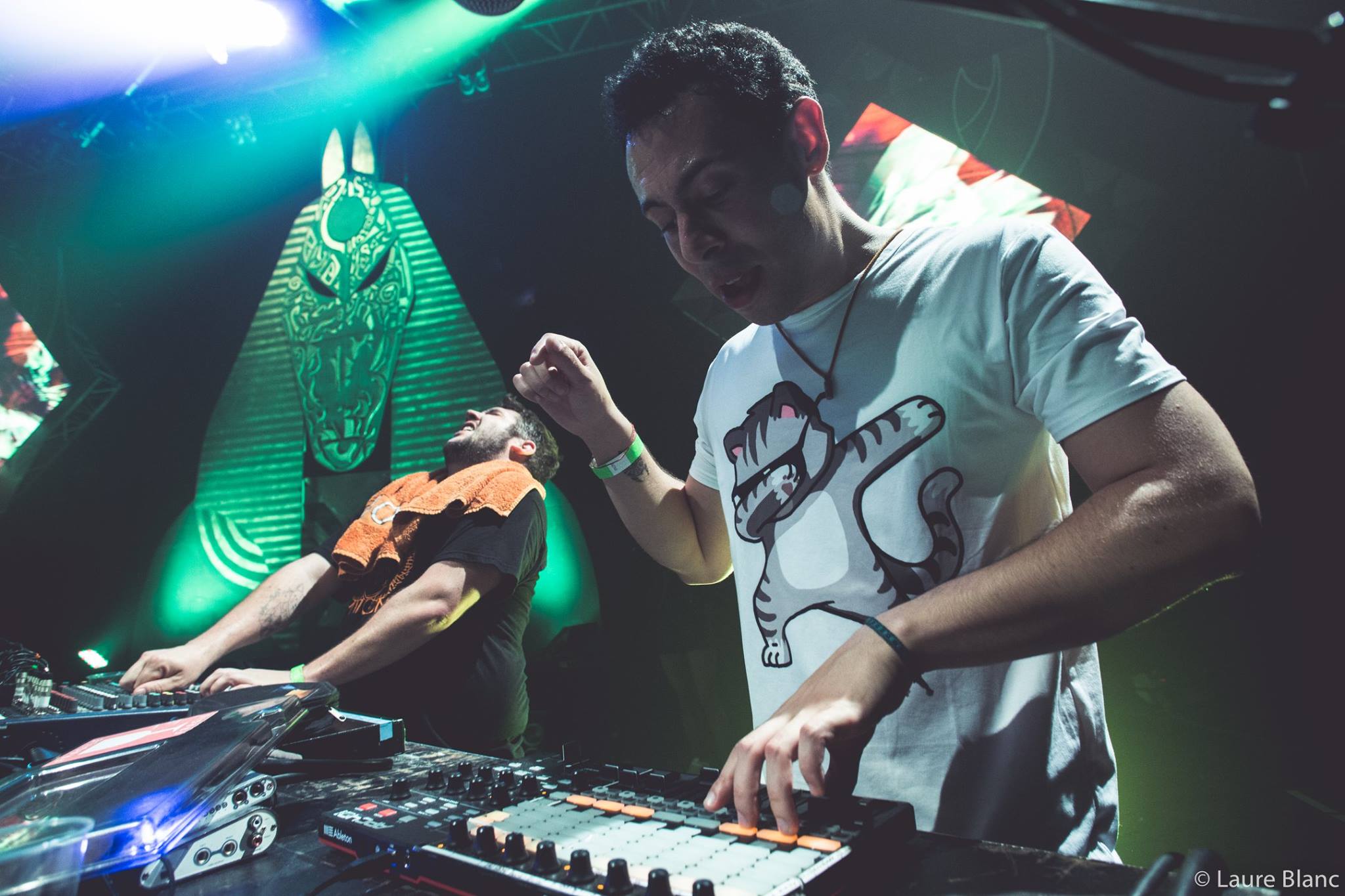 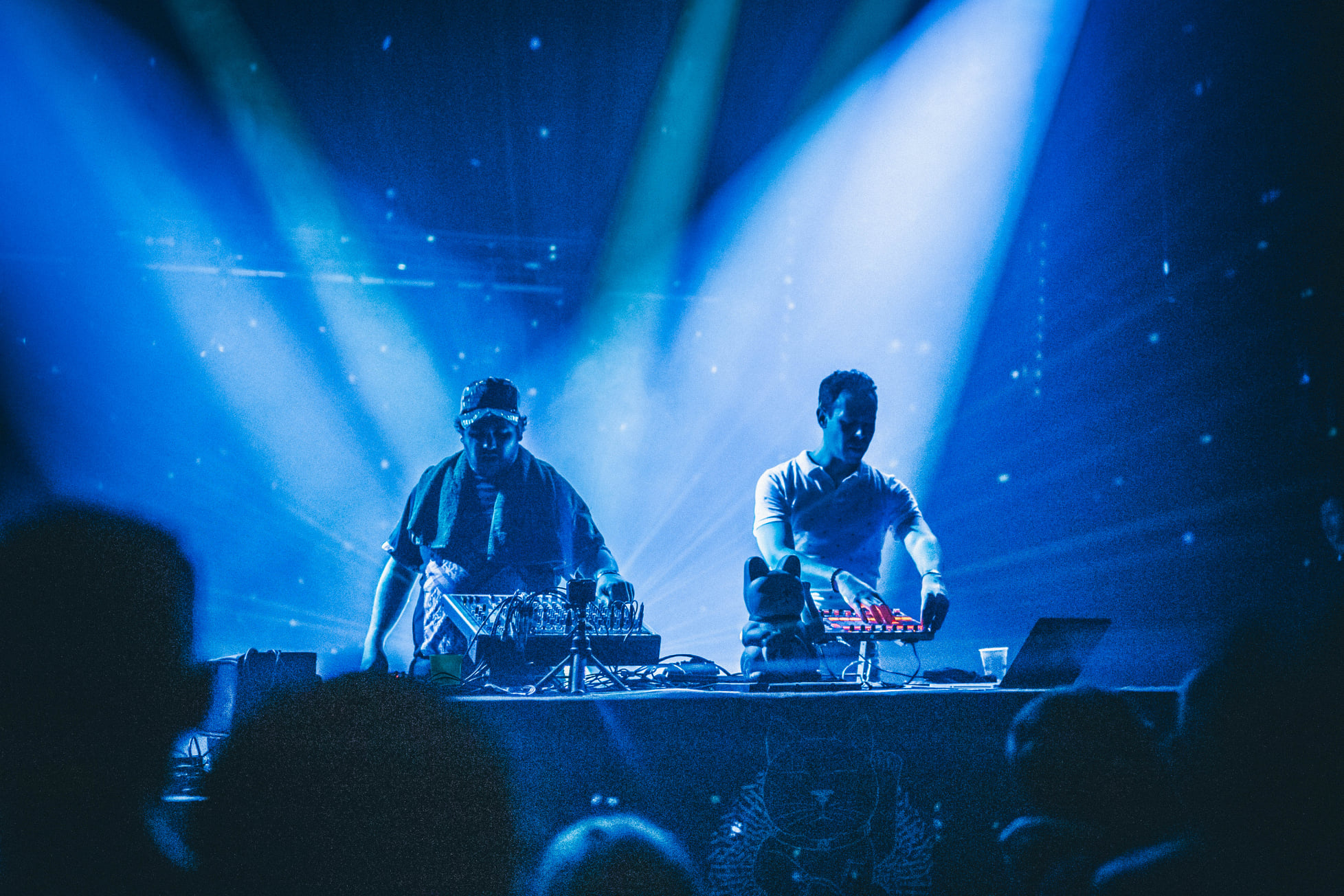 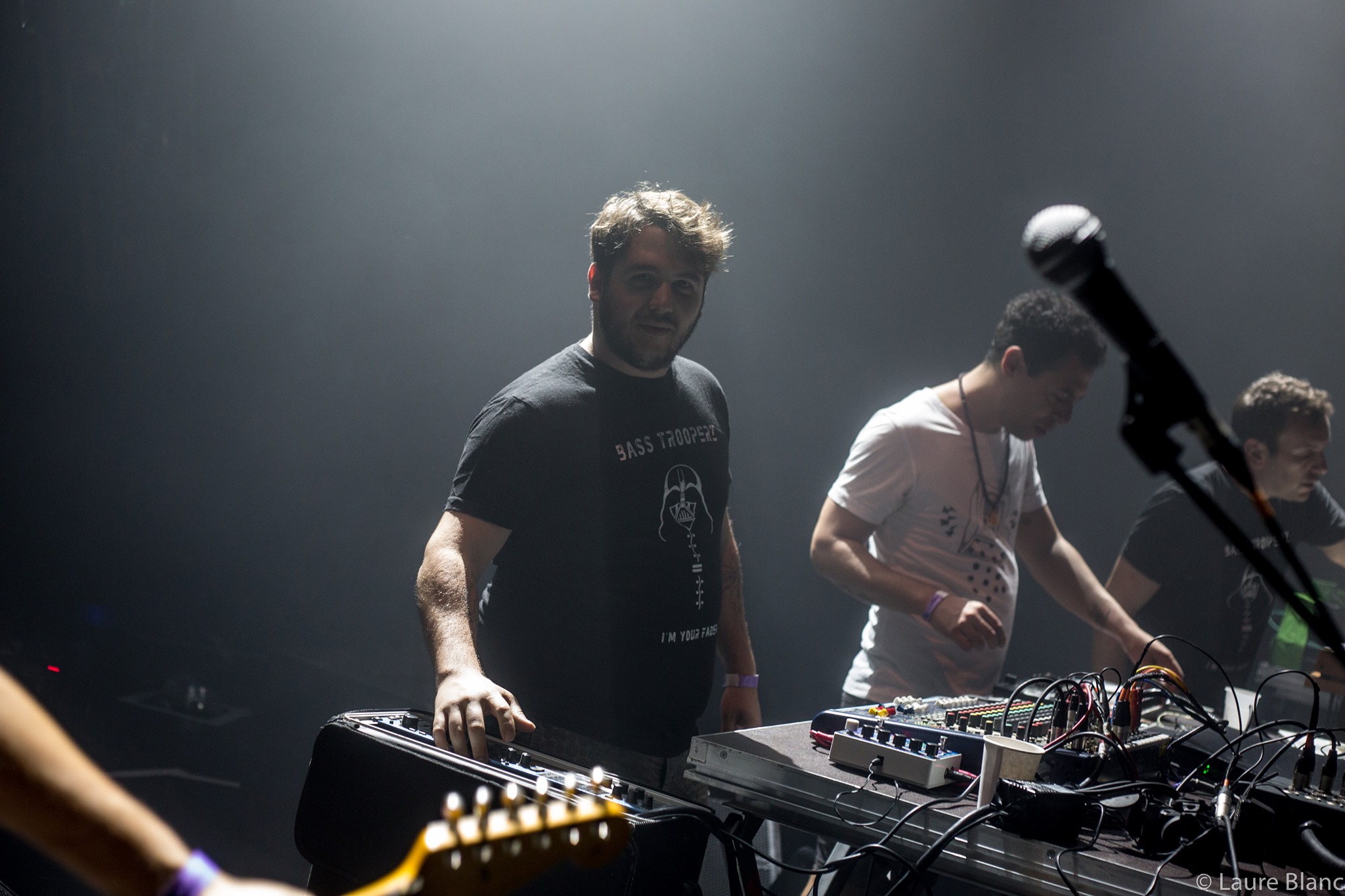